It’s a Matter of the Heart: St. Margaret Mary Alocoque and the Sacred Heart of Jesus Born July 22, 1647 in Burgundy, France, Margaret was the only daughter of Claude and Philiberte Alacoque.1 Her devotion to the Catholic faith was evident from a young age as it said that she preferred silence and prayer to play while still a child. Margaret practiced severe corporal mortification after her First Communion when she was nine. However, rheumatic fever confined her to bed for four years until she made a vow to the Blessed Virgin Mary to commit herself to religious life. Immediately, she was healed from the fever and Margaret added Mary to her baptismal name.2

When her father died, Margaret Mary’s family assets were refused to them by relatives, sending her mother, her siblings, and herself into severe poverty. Until she was 17 and the family regained their assets, her only consolation was praying before the Blessed Sacrament. Once they were financially secure, Margaret Mary’s mother hoped to find her a suitable husband and encouraged her to go to dances and balls. Maragaret Mary believed that her childhood vow to religious life was no longer binding because she should obey her mother’s wish for her to marry.3

One night, Margaret Mary experienced a vision of Christ, scourged and bloody, after she had come home from a ball. Reproaching her for forgetting about Him and participating in self-indulgent social events, he reminded her of her promise to His Mother to enter the religious life. Not being able to deny Christ, she was determined to fulfill her childhood vow and entered the religious life when she was almost 24 years old at the Visitation convent at Paray-le-Monial in 1671.4

Her vocational process was several years long as the genuineness and devotion to the Catholic Church had to be proven to her superiors at the convent. While she was allowed to don the religious habit in 1671, she was not allowed to make a religious profession the following year as was the custom.5 She was able to make her first profession of vows in 1672. 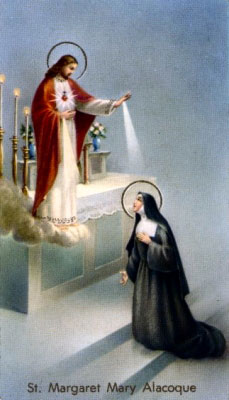 From the time she entered the convent, Margaret Mary experienced intense visions of Christ. From December 27, 1673, she began a series of private revelations that continued for over a year and a half.6 In these visions, Christ informed Margaret Mary that she was to be the chosen ambassador to spread devotion to his Sacred Heart. This devotion was comprised of receiving Holy Communion on the first Friday of each month, Eucharistic adoration for a holy hour on Thursdays, and that the feast of the Sacred Heart be established and celebrated.7 Christ instructed her that during the holy hour on Thursday nights, she was to meditate on Jesus’s agony in the Garden of Gethsemane.

During the retreat before her first profession, she had a vision of Christ who said: “Behold the wound in my side, wherein you are to make your abode, now and forever.” Later, the Lord appeared to her again on the feast of St. John the Evangelist where he said: “My divine Heart is so inflamed with love for mankind…that it can no longer contain within itself the flames of its burning charity and must spread them abroad by your means.”8 Then Our Lord instructed Margaret Mary that she was to establish the devotion and spread His Twelve Promises of the Sacred Heart to all those who practiced the devotion.

The Twelve Promises of Jesus to Margaret Mary are as follows:

However, Margaret Mary was not able to convince her superior, Mother de Saumaise, that her visions were authentic and valid. She was able to receive the support of the community’s confessor, Bl. Claud La Colombiere, while her community openly opposed the genuineness of the visions.9 The opposition immediately ended when a new superior was elected, Mother Melin, and Margaret Mary was chosen to be her assistant as novice mistress.

Once Margaret Mary had the backing of her own community, she inspired and oversaw the convent’s observation of the feast of the Sacred Heart beginning in 1686, and a chapel was built to honor the Sacred Heart at Paray-le-Monial.

Margaret Mary died on October 17, 1690 at her Visitandine convent saying “I need nothing but God, and to lose myself in the heart of Jesus.”

After Margaret Mary died, the devotion to the Sacred Heart of Jesus was observed by her convent and adopted by the Jesuit order even amidst controversy. The devotion was not officially recognized and approved by the Vatican until 1765, when Pope Clement XIII declared it both valid and genuine.11

Every spiritual maxim, revelation, vision, and action regarding the devotion to the Sacred Heart by Margaret Mary, was scrupulously examined by the Sacred Congregation of Rights. In 1824, Pope Leo XII pronounced her venerable and in 1864, Pope Pius IX declared her Blessed.12

During her process of canonization, her tomb was opened to reveal her body incorrupt and two miracles occurred. She was canonized by Pope Benedict XV in 1920. Her feast day was established on October 16th.

In 1928, Pope Pius addressed the Catholic Church’s position on the devotion to the Sacred Heart in his papal encyclical Miserentissimus Redemptor. In this Church document he reaffirmed the credibility of Margaret Mary’s visions of promises “that all those who rendered this honor to His Heart would be endowed with an abundance of heavenly graces.”13

St. Margaret Mary Alacoque is the patron saint of devotees to the Sacred Heart of Jesus, those afflicted with polio, and those who have lost parents.

the spirit with which you so remarkably endowed

so that we may come to know

that love of Christ which surpasses all understanding

and be utterly filled with your fullness.

Through our Lord Jesus Christ, your Son,

who lives and reigns with you in the unity of the Holy Spirit,

one God, for ever and ever. Amen.